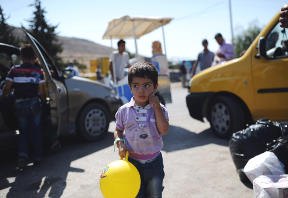 By H.K. Tzanis
A spike in the number of undocumented migrants landing on the eastern Aegean island of Chios from the opposite Turkish coast last month, many of whom reportedly declared themselves as Syrian nationals, again raised concerns in Greece of a wave of refugees fleeing war-torn Syria.
As the nearest Schengen Pact country to the increasingly brutal civil war engulfing the Mideast country, Greece could face a humanitarian crisis if multitudes of Syrian refugees crisscross Turkey to reach EU soil, regardless of whether it’s remote Evros Prefecture across a same-name river separating Greece and Turkey or the tiniest rock islet in the Aegean.
According to the deputy regional governor of Chios, Costas Yaniaris, the migrants were initially hosted at temporary shelters run by the local police and coast guard authorities, before being processed and released.
Nevertheless, he told Southeast European Times that there was no information on how many of the non-nationals which arrived in August were deemed as candidates for asylum and how many were simply served with a deportation notice – called a “red paper” due to its color – which mandates that an illegal alien exit the country within 30 days.
According to Ioannis Michaletos of the Athens-based Institute for Security & Defence Analysis, Greek authorities have already set in motion a contingency plan for extra security in sea regions from Samothrace (in the northeast Aegean) to Kastellorizo (off Turkey’s southwest Mediterranean coast).
The main characteristics of the plan, as he said, are increased coast guard patrols, including night-time duty and a full mobilization of all available personnel, including a 300-man coast guard special forces unit.
“It’s reminiscent of the security in place for the 2004 Olympic Games of Athens,” he said. Conversely, Michaletos said a full mobilization will take weeks to implement, while additional funding for such a mission in recession-plague Greece is inadequate.
“You need extra EU funding, and secondly, the coast guard that will intercept such people, illegal immigrants or refugees, must take them to shelters that will have to be built and staffed … Greece’s biggest problem (in terms of illegal entry of third country nationals) is that it’s in Schengen Pact, this acts as a magnet for such people. Their final destination is, of course, England, France and elsewhere in western Europe.”
Speaking from the large eastern Aegean island of Lesvos, which in the past has also been repeatedly targeted by migrant smugglers, University of the Aegean sociology department professor Stratos Georgoulas told SETimes that Greece is facing a classic no-win situation from any pending movement of a significant number of people from the Syrian war zone.
“I believe that if we wanted to describe how the Greek government faces or will face any significant movement of such people (onto its territory) it would be like a person who is blindfolded and whose hands are tied, namely, from the international treaties that the country has signed.
“We’ll be obliged to do a simple thing, which will be to restrict them to migrant shelters … we are, unfortunately, becoming a warehouse of tortured souls. On the other hand, our allies consider that since we receive some funding from the EU for refugees and asylum seekers that there’s an economic profit from this,” he said.
Georgoulas, who lectured in criminology as a visiting professor in Damascus in 2007 and also conducted research in Syria on the subject of honor killings, bemoaned the fact that authorities are still not able to differentiate between groups of people arriving clandestinely on Greek shores.
“We tend to group them together as a single group, yet many of these people have a distinctly urban and political identity,” he said, adding that his experience shows that mostly Syrian minorities (Alawites, Christians and others) attempt to flee to the west.
Speaking to local reporters late last month Greek Deputy Foreign Minister Dimitris Kourkoulas reiterated that Athens has informed its European partners that it has very limited resources at present to handle war refugees.
Kourkoulas said the tragic numbers dealing with Syria, 100,000 victims and millions of refugees, constitute “the greatest humanitarian catastrophe of the 21st century.”
According to United Nations High Commission for Refugees (UNHCR) figures released on September 3rd, Lebanon hosts the largest number of Syrian refugees, estimated at 720,000, followed by Jordan with 520,000; Turkey with 464,000; Iraq, 172,000 and Egypt, 111,000 refugees. UNHCR estimates that 2 million Syrians are refugees outside the country’s borders, with about 4.25 million listed as internally displaced people.
(Used by permission of Southeast European Times, www.setimes.com)