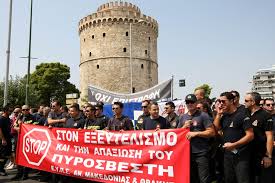 On September 6, representatives of the Hellenic Police, the Fire Brigade and Coast Guard hosted a rally in the White Tower of Thessaloniki, the second biggest city in Greece, shouting slogans, to express their opposition to wage and pension cuts.
At the meeting point, the White Tower, several representatives of the Pan-Hellenic Federations, deputies of opposition parties, the president of ADEDY as well as the mayor of Thessaloniki, Yiannis Boutaris, gave their speeches in front of the protesters.
Earlier, the protesters had passed from the offices of political parties, where they shouted slogans and gave resolutions with their demands. The rally ended in the building of the Ministry of Macedonia –Thrace.