Thissio Square to Be Renamed 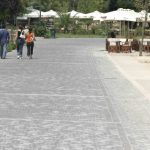 Thissio Square will be renamed into Jacqueline de Romilly, in honor of the Hellenist and member of the French Academy Jacqueline de Romilly.
The decision has already been taken by the municipal council of the Municipality of Athens. The members of the Central Archaeological Council gave the green light for the construction of three columns in the junction of the streets Heracleidon, Nileos, Apostolou Paulou Street and Akamantos.
The three columns of white marble, measuring 1.60 x 0.45 cm and a thickness of 0.6 cm, will be adjacent to the archaeological site of the Ancient Market (south of the Temple of Hephaestus) and will be placed on a marble base. The Council gave its unanimous approval.
Jacqueline Worms de Romilly was a French philologist, classical scholar and fiction writer. Because she was of Jewish ancestry, the Vichy government suspended her from her teaching duties during the Occupation of France. She was the first woman nominated to the Collège de France, and in 1988, the second woman to enter the Académie Française. She was also known for her work on the culture and language of ancient Greece, and in particular on Thucydides.