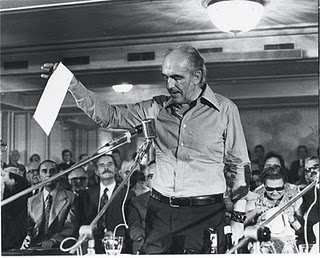 The once-dominant and now-vanishing PASOK Socialist party will convene for a two-day Congress in Athens on Sept. 3 to note its 39th anniversary as current leader Evangelos Venizelos is desperately trying to keep it from vanishing.
With the party hovering around 5 percent in the polls, falling from 44 percent when it won the 2009 elections but then imposed unpopular austerity measures on the demand of international lenders, Venizelos is hoping to use the event as a look back at the good old days of its founding on Sept. 3, 1974 by the late Andreas Papandreou.
That came in the aftermath of the 1967-74 military junta.  The event, which will be hosted at the Hellenic Cosmos venue in the southern suburb of Tavros, is titled From the Metapolitefsi to the Crisis: From the Crisis to Reformation: PASOK and Greece, 1974-2014.
The symposium will address the history of PASOK and discuss whether it has a future as Venizelos accepted the post of Deputy Prime Minister/Foreign Minister in the government led by Prime Minister Antonis Samaras, the New Democracy Conservative leader and is continuing to back pay cuts, tax hikes, slashed pensions and the firing of public workers, all antithetical to PASOK’s founding principles.
The party governed Greece from 1981-1989 under Papandreou, from 1996-2004 under Costas Simitis and from 2009-2012 under Andreas Papandreou’s son, George Papandreou, who signed Greece’s first bailout deal with international lenders that pushed the country deeper into recession and a record unemployment rate.
Venizelos will deliver the keynote speech at the gathering while Papandreou, run out of office in 2011 and who is now a Member of Parliament but spends much of his time lecturing at colleges in the United States and giving speeches on how to govern a country, and Simitis will also speak.