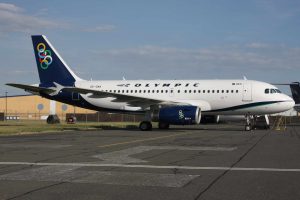 Olympic Air in its letter addressed to the Hellenic Parliament, says the crisis is to blame for its decision to stop operating domestic flights. At the same time, a document of the Competition Commission reveals that an ex officio investigation into the market for passenger air transport  has been carried out unannounced on-the-spot checks on Olympic Air and Aegean Airlines.
The Commission’s objective was to examine “the potential anti- competitive nature of the exit / withdrawal of one of the two airline companies from specific flights.”
However, as stated in the document, the research findings have not yet been finalized and therefore their results are not yet to be announced.
The documents were sent to the Parliament after the question raised by 13 Members of SYRIZA party, led by Litsa Ammanatidou and Panayiotis Lafazanis, concerning the announcement of Olympic Air according to which, from September 30, 2013, the company will stop operating flights from Athens to Rhodes, while flights from Athens to Thessaloniki and Heraklion, Crete, are also to be suspended from October 14, 2013.