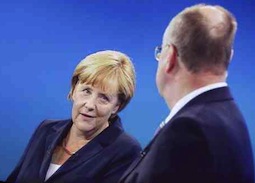 German Chancellor Angela Merkel, a resounding favorite to win re-election on Sept. 22, found herself trying to defend her policy of propping up Greece with bailouts while her rival, Peer Steinbrueck said she was administering “deadly doses” of austerity, during their televised debate.
Steinbrueck, from the SPD Social Democratic Party, hammered away at Merkel for sending German taxpayer money to Greece with Germany the biggest contributor to two bailouts of $325 billion from international lenders.
Merkel, who said for the first time that Greece may need more aid, countered that narrowing bond spreads in the euro area show her course is right for Europe and for Germany.
Germany needs “a new beginning,” Steinbrueck, Merkel’s first-term finance minister, said. “We’ve been standing still for four years. A lot of things didn’t get done.” He has a lot of ground to make up with Merkel holding leads of 15-19 percent in the polls for her Christian Democratic party.
Spot polls taken after the debate were split on the winner. “It was roughly even, which at the very margin is good news for Steinbrueck,” Holger Schmieding, chief economist at Berenberg Bank in London, told Bloomberg news agency. “His personal popularity gap to Merkel, which is huge, may narrow a bit. But I don’t think this will be a major game-changer for party preferences.” Merkel “is not the most charismatic person, but in a way many Germans like her that way.”
Merkel, who has insisted on big pay cuts, tax hikes and slashed pensions in Greece, said she brought stability to the Eurozone and to Germany, which is profiting off its loans. The German economy is “strong” with more in employment than ever before and higher tax revenue than at any time, she said, warning that Steinbrueck’s platform of tax increases threatened to put German prosperity at risk.
Steinbrueck said that far more emphasis must be placed on bolstering economic growth and stemming record unemployment. Referring to a program to tackle youth joblessness announced by Merkel earlier this year, he said “the question is what’s come of it.” There is “only the savings club battering Greeks over the head.”
Merkel retorted that it was under SPD chancellor Gerhard Schroeder that Greece had been allowed to join the euro in the first place.
In Germany, the election campaign has been dominated by the euro-area debt crisis and its impact on the region’s economy since Aug. 20, when Finance Minister Wolfgang Schaeuble said that Greece will need more money. Steinbrueck said more Greek aid shows the government’s crisis strategy isn’t working.
“Nobody knows precisely how things will develop in Greece,” Merkel said. “My job as chancellor is to ensure that the reform pressure on Greece doesn’t let up.” She said “it’s possible that there will be a new aid package for Greece. Nobody knows how big.”