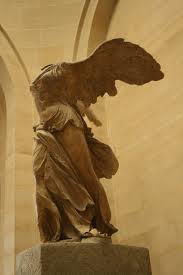 The Louvre Museum hopes to raise another million euros in an appeal for donations it launched to find the funds for the conservation of one of the world’s greatest masterpieces that is housed in the Paris institution, the Winged Victory of Samothrace, also called the Nike of Samothrace.

The new campaign is called Everybody Can Be Maecenas and will begin Sept. 3 when the famed sculpture will be removed from viewing from one of the most advantageous spots in the museum and not returned until the summer of 2014.

Winged Victory suffered the same fate as the Parthenon Marbles that were stolen from the Acropolis by Lord Elgin and now reside in the British Museum. Victory was discovered in April 1863 by the French consul and amateur archaeologist Charles Champoiseau, who stole it and sent it to Paris.

Both the officials of the British Museum and the Louvre have refused to return the stolen goods to Greece claiming the works now belong to them.

The conservation project is expected to allow the improvement of the skeleton and the cleaning of the sculpture that was designed by different kinds of marble.

The total budget for the conservation project stands at four million euros, higher than originally estimated but the Louvre has already collected three million euros in donations and now wants to fill the remaining gap so work can run on schedule. The donation drive will last to the end of the year.

Individuals and companies can make contributions online via the Internet at the following addresses or by post from Tuesday on: www.louvresamothrace.fr or www.tousmecenes.fr