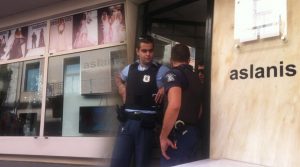 Next to the famous Greek fashion designer Mihalis Aslanis’ dead body,  found by one of his associates on the afternoon of August 28, were empty boxes of drugs and four handwritten pages in Greek  and French where he had written his last thoughts.
According to latest information, in his last letter Aslanis described the impasse he was at after the serious problem he had to face which made him move to Brazil, as well as his concern for the financial and social condition of the last years in Greece.
On Aug. 21, protothema.gr hosted Aslanis’ last interview which was rather revealing of the reasons that eventually led him to put an end to his life.
The well-known fashion designer was facing serious financial problems. In his effort to save his company, Aslanis moved to Brazil and tried to take new steps there. He didn’t manage to do so and had to sell his real estate while he was fighting with his debts.
In another interview to the newspaper Espresso, Mihalis Aslanis maintained he fell victim to two women he had hired, one of whom was responsible for taking care of his house. He even said that he was afraid for his life.
Aslanis explained that the two women who were managing his affairs, not only destroyed him financially, but  disappeared without leaving any traces.

One of the women was from Albania and had a very close relation with him. It was Aslanis who helped her with her studies, and after she finished her studies in Accounting, he hired her in his business.
“I used to give them money to pay the taxes, my obligations towards the Social Insurance Institute (IKA) and various banks. But they neither took care of pending issues nor did tax returns. They kept the money for themselves, resulting in the accumulation of debts I was not aware of. A friend of mine,an accountant warned me. If he had done this earlier, maybe I could have managed to save myself,” Aslanis explained.