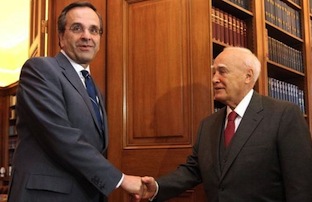 Greek Prime Minister Antonis Samaras met on Aug. 27 with President Karolos Papoulias at the Presidential Mansion in central Athens to discuss Greece’s possible role in a US-led military intervention in Syria.
The International Business Times reported that Samaras has given the go-ahead for U.S. planes to use American bases on Souda and Kalamata to hit Syria in retaliation for the government there reportedly using chemical weapons against civilians.
U.S. President Barack Obama, who met with Samaras at the White House on Aug. 8, reportedly asked Samaras for permission to have the American bases used for military action and got it, although Greece said it would not participate in any assaults.
“One year ago, the region around Greece emitted a sense of stability while Greece was the source of instability,” Samaras said following the meeting. Now that situation has made a 180-degree turnaround. Greece is a bastion of stability and security in a region that is literally ablaze. These issues were extensively analyzed with President Obama.
“This sense of stability also needs to be enhanced within this country,” Samaras told Papoulias. Samaras did not respond to journalists’ questions regarding whether Greece will make its bases available to its NATO allies.