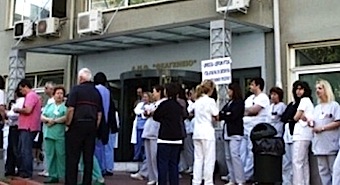 The Greek government has raised the number of public workers by 8,099 on a so-called mobility list of those who will see already-reduced pay cut to 75 percent for up to eight months and then fired if another job can’t be found.
That makes it 12,500 on the list so far with another 12,500 set to be added next year as the government of Prime Minister and New Democracy Conservative party leader and his coalition partner, PASOK Socialist leader Evangelos Venizelos, who is his Deputy Prime Minister/Foreign Minister race to meet firing deadlines set by the country’s international lenders.
The names were finalized in a meeting on Aug. 26 of senior government ministers overseen by Samaras though Administrative Reform Minister Kyriakos Mitsotakis had promised there would be a review of all workers before they were selected to protect those with genuine qualifications from political appointees.
The list draws on staff in all 17 ministries, with the largest number – the 3,000 members of the municipal police – coming from the Interior Ministry. Last month, 4,401 civil service employees (2,114 teachers, 2,234 school guards and janitors and 53 staff from the administrative reform ministry) were informed that they were being transferred.
So far, Parliament workers who’ve also been protected from further austerity measures, and high-paid managers have been exempted from transfer or firing and the government hasn’t explained how it chose those who are being placed on the list. It represents the biggest move to transfer civil service staff in recent Greek history.
Mitsotakis last month admitted the transfer is just a method to wind up firing as many people as possible, backtracking on an earlier pledge he had made, as have Samaras and Venizelos.
“It is true that there will be a number of employees placed who will be placed in the mobility scheme who will not be absorbed and they will have to head to the exit … we must be sincere about this,” Mitsotakis, the son of a prime minister, said. He didn’t say how many it would be but unions said they believe the government wants mass firings.
Speaking on private Mega TV, Health Minister Adonis Georgiadis, engaged in a live confrontation with medical staff, placed on the mobility scheme when their hospital shut down last week. The Polykliniki at Omonia closed as part of a government plan to downgrade eight hospitals to urban health centers.
Georgiadis said that staff will not be fired but will be transferred to Evangelismos hospital by the middle of next month. He dismissed the workers’ concerns, claiming they were kicking up a fuss because they “were moved a kilometer from Omonia to Evangelismos”.
Annoyed by their complaints, he said, “We should have fired you so you’d see what things are really like,” before going to claim that the the only workers protesting the government’s moves were unionists linked to the Communist Party, the major opposition party Coalition of the Radical Left (SYRIZA) the Anticapitalist Left Front (Antarsya).
The Greek public sector has been bloated by decades of needless hirings by PASOK and New Democracy administrations in return for votes and the two parties ironically now are being charged with firing thousands of they people they hired.