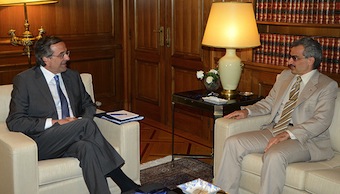 With a looming hole of as much as $14 billion in the budget and growing speculation Greece will force losses on its international lenders the same way it did to private investors to write down its debt, Prime Minister Antonis Samaras met with Saudi Prince Alwaleed bin Talal to discuss investments in Greece.
Greece is lagging far behind in a privatization program that took another setback when the chairman of the agency looking to sell off state enterprises and entities had to resign because of an ethics violation.
On the block are utility companies, Athens΄ international airport and two of its main ports. The country is also looking for investments in several real estate developments which could possibly interest the prince, who is the part owner of luxury hotels in London, New York and Paris.
Greece has been accused of dragging its feet on privatization. A government official who declined to be named played down Alwaleed΄s visit, however, telling Reuters: “It was a customary visit, there is interest in investing in Greece.”
“There are two issues in Greece,” Thanos Vamvakidis, head G10 FX Strategy at Bank of America Merrill Lynch Global Research told CNBC. “There is a funding gap in 2014 and 2015 and this needs to be covered, though it will be discussed in the October review (of the bailout program).”
Vamvakidis told CNBC Europe΄s “Squawk Box” that Greece needed a debt writedown of at least 10 percent of its gross domestic product (GDP). “It has to be done because most of the Greek debt is going to the rest of Europe, if they don΄t provide them with debt relief then Greece won΄t be able to repay them.”
“The important thing is that they need to provide more money for Greece, the problem is with the design of the [bailout] program…[the program] assumed that Greece would reach a primary surplus of 4.5 percent and keep this for 20 years- no country has ever done this, it΄s impossible.”
Note that Al Waleed bin Talal bin Abdulaziz al Saud is the founder, CEO, and 95%-owner of the Kingdom Holding Company. Arabian Business ranked him as the most influential Arab in the world.
In March 2013, Forbes listed Al Waleed as the 26th-richest man in the world, with an estimated net worth of US $20 Billion. Prince al Waleed disputes the Forbes valuation, and believes his wealth to be $26 billion.