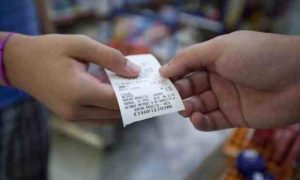 Ignoring a plea from Prime Minister Antonis Samaras that a reduced Value Added Tax (VAT) would be increased again if the savings weren’t passed on to customers and taxes paid to the state, as many as 100 percent of of businesses on some Greek islands are evading taxes.
The Financial Crime Unit (SDOE) with the support of the Police and Coast Guard Units, conducted inspections under the code name Theros 2013 to find tax cheats, uncover drink smuggling and unlawful trading, the newspaper To Vima reported.
Between Aug. 6-18,, more than 100 SDOE teams conducted 1.256 inspections. According to the, results, some 586 businesses have committed 5,668 violations mostly relating to the non-issuing of receipts and the illegal operation of cash registers.
It was not reported if anyone was arrested or prosecuted as it’s common in Greece, especially on islands, for establishment owners not to pay taxes nor issue receipts nor be held accountable for either.  The SDOE ordered temporarily closure of 13 businesses for 48 hours, among which were three night clubs, four beach bars and six restaurants.
In one case in Fthiotida, a night club had been operating two cash registers for five years, without documenting revenue or paying the VAT it collected, cheating both customers and the government.
Greece is enjoying a record-breaking tourist season but the results of tax inspections so far show that the government is not benefitting as almost all the money collected in many cases is being kept.
According to the results, the average violation rate reached 46.65%, while the high ranking tourist areas as regards the violation rates are the following:
1. Amorgos – Paxos – Symi: 100%
2. Santorini: 96.43%
3. Evia: 85%
4. Rhodes: 81%
5. Myconos – Andros: 90%
6. Paros – Antiparos: 77.8%
7. Crete: 62.9%
8. Tinos: 60%
9. Attica: 54%
10. Halkidiki: 34%