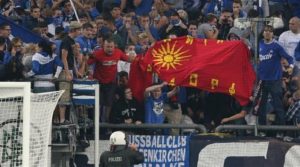 Hot-blooded fans of the German association-football club Schalke 04, raised a flag depicting  the Sun of Vergina and some Greek symbols that Skopjans try to “borrow” in order only to pique the Greek fans of PAOK (Pan-Thessalonian Athletic Club of Constantinopolitans), a Macedonian sports club in Thessaloniki, Greece.

While the match of Schalke 04 with PAOK was on in the Veltins-Arena, PAOK fans were left open-mouthed when they saw a group of Schalke’s fans raising a flag with the Vergina Sun and some symbols in favor of the Skopjans while they were crying out “Macedonia”.

According to the international media, the aim of the German fans was to provoke the Thessalonians.

Immediately the people heading the Greek delegation of the Double-headed eagle of the north, as PAOK is called, talked to the people of UEFA and asked the police to intervene and take the flag down.

The local police entered the grandstand and proceeded to the necessary actions. Policemen used pepper sprays and batons in order to disperse the fans of the German club.

On August 22, Schalke 04 published an announcement in which it tried to respond to the incident with the flag that took place at the grandstand of its fans. In this announcement, the German club stressed that this act had no reason at all to occur and added that the behavior of the PAOK fans was also provocative.

Giorgos Hatziparaskos, an 86-year-old baker from Crete, is one of the last people who creates the iconic Greek phyllo dough by hand.
Charity