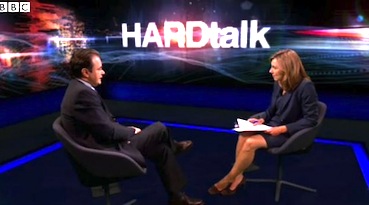 Former Greek Minister of Finance George Papaconstantinou, who has been charged with wrongdoing in the handling of a list of 2,062 Greeks with $1.95 billion in secret Swiss bank accounts that still hasn’t been checked for possible tax cheats, told the BBC in an interview that Greeks were looking for someone to blame for a crushing economic crisis.
“I have a clear conscience in terms of what I did as Finance Minister and I would think that most people who have a little bit of distance from the Greek story see quite clear that was necessary.”
As he explained during the interview, “I don’t think there will be a Finance Minister who will have reduced the deficit by 6 percentage points of GDP as I did during my tenure.” The former Finance Minister admitted that he is hated in Greece, but, as he said, “people need time to go over this extremely difficult situation where they blame everyone and especially the people who signed off.”
Talking about the so-called Lagarde List of Greeks with money in the HSBC branch in Geneva, he said: “I have a clear conscience of having tried to do what was necessary to exploit the information of the list and go after tax evasion, yes, I have a clear conscience on that, if you are asking me whether it could have been handled in a different way I would say yes, it could have.”
He was indicted by Parliament after it was found that the names of three of his relatives had been erased from the list. It’s not been determined who did it but he said he didn’t. The list was also in the hands of financial crimes squad investigators and another former finance minister, Evangelos Venizelos, the PASOK Socialist leader who is now Deputy Prime Minister/Foreign Minister in the coalition government led by Prime Minister and New Democracy Conservative leader Antonis Samaras.
Echoing similar comments by German Finance Minister Wolfgang Schaeuble, he said Greece will likely need a third bailout or impose losses on its public investors, the Troika of the European Union-International Monetary Fund-European Central Bank (EU-IMF-ECB) the same way it did to private investors and Diaspora bondholders.
In another part of his interview, when asked about the initial reaction of German Chancellor Angela Merkel on the first rescue package of $152 billion to Greece three years ago, he said: “We needed a lot of time to convince Angela Merkel that there was no other way but the rescue. A series of countries – but chiefly Germany – believed that if Greece took more austerity measures, it would not need rescue, because the markets would be convinced and would continue lending.” Papaconstantinou said he knew from the beginning that was a fantasy.
[youtube]Fz1fZCehmE8[/youtube]