More
GreekReporter.com Europe Kalymnos Is The Island of Climbing

Kalymnos Is The Island of Climbing 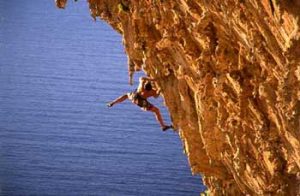 The most popular daily newspaper in Rome and central Italy, Il Messaggero, hosted an article dedicated to the Dodecanese island of Kalymnos, Greece, describing it as “the island of climbing.”

“Just a one-hour flight from Athens is located the destination for all those who love climbing. They come here from all parts of the world, because they find solid slopes, good maintenance and a blue sea to cool off,” the reporter wrote.

“In the past, Kalymnos was the island of sponge divers. Until today, at the jetty of Pothis, we see sponges drying under the sun. There are still many labs for sponge processing and the old profession survives on the island,” added Il Messaggero.

Aris Theodoropoulos, from Athens, who has written a special guide on climbing on the island explains that, “a climber can choose Kalymnos all year through. The best seasons for climbing are spring and fall, but in winter as well one can “confront” the slopes in the southern part of the island, wearing only a T-shirt, while during the summer cool winds blow and many slopes are not seen by the sun.”

“The first to discover the Aegean island as the perfect destination for climbing  was the Italian director Andrea Di Mari, in the 90’s when he chose the Dodecanese islands for his family vacations,” the newspaper revealed.

The former mayor of Kalymnos George Roussos, stated to Il Messaggero that the island “is traditional and does not constitute a destination for mass arrivals of tourists who choose it only for the sea.”

“At first,” added the former mayor, “the people of the island didn’t understand this phenomenon of young people dressed in a strange way carrying a sack.” But then, we discovered them, we understood that many of them were professionals, and businessmen and we welcomed them with open arms.”

Finally, the Italian newspaper mentioned that “the island’s municipal office for climbing is one of the best organized in Europe and in the whole world,” and that “in Kalymnos today, the economic crisis is clearly less felt than in Athens or Thessaloniki. This is thanks to the rocky slopes, to a smart local administration and to numerous climbers that show their preference to the island throughout the year.”