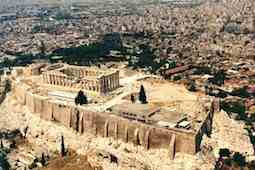 The French public radio channel France Culture will broadcast two one-hour radio documentaries by George Archimandritis (of the series Cities-Worlds), devoted to the Greek capital on August 24, Saturday, at 4 p.m.

The Spirit of Athens (To pnevma tis Athinas) is the first one, with personalities of the Greek culture, who were born, raised or live in Athens, such as the international director Kostas Gavras, the painter Alekos Fassianos, the internationally known musician Eleni Karaindrou, the writer Menis Koumandareas, the National Art Gallery director Marina Lambraki-Plaka.

Along with the architect Tasos Tanoulas (responsible for Parthenon’s restoration from 1984-2010) and the professor of architectural theory Panayiotis Tournikiotis, the participants guide us through emblematic places of the Athenian spirit, narrate the representation of the city in the arts, talk about the great personalities of arts and letters, who are an inseparable part of the city.

The second documentary is entitled The life of Athens (I Zoi tis Athinas), which outlines the city’s modern portrait. For this purpose, George Archimandritis ‘recruits’ the artistic director of the Greek Festival, George Loukos, the writers Soti Triantafillou, Menis Koumandareas, Gazmend Kapplani, Ilias Mamalakis, the creator of the magazine Athinorama and the person responsible for the Golden Chef’s Hat Awards, Dionisis Koukis, as well as the musician Olga Kouklaki.

The radio tribute to Athens will be broadcasted through the website of the radio channel France Culture www.franceculture.fr.

Every year Greece and the Greek Diaspora celebrates its national day on March 25th. This day commemorates the start of the War of Independence.
Diaspora

Successful Greek-Americans from all across the West Coast are being featured in a new YouTube series titled "Learn From the Greeks".
Food