Tomb of Alexander the Great Unearthed? 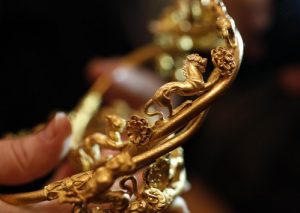 A group of archaeologists in Amphipolis, a municipality in Serres, claim to have made one of the greatest archaeological discoveries ever, as they believe they have uncovered the tomb of Alexander the Great.
They said the tomb has a circumference of 498 meters, an artwork of perfection would only be built for a king.
Th masterpiece is externally covered with high quality exquisitely-carved marble, a remarkable feat given the tools available at the time.
The tomb once was covered with soil and topped with a lion, the one that has been reassembled further uphill and known as the Lion of Amphipolis which  was found by Greek soldiers in 1912.