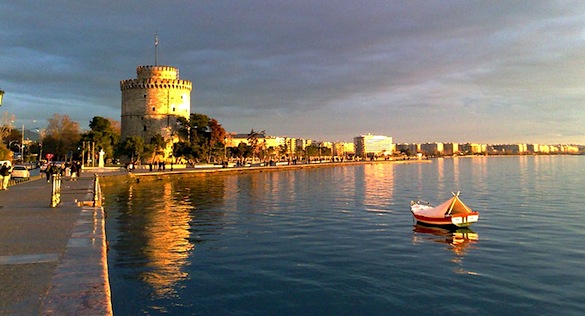 Thessaloniki is more than just Greece’s second city; it is a place with its own unique and rich cultural heritage, including that of the hundreds of thousands of Jews who once called it home.
This long Jewish cultural heritage is what city and tourist officials hope to bring to the forefront in hopes that more visitors will consider visiting this beautiful ancient city, which has so many stories to tell.
“Thessaloniki has a long history from the Roman Byzantine empires and a very important Jewish period,” Evdokia Tsatsouri, the Marketing Manager for the Thessaloniki Hotels Association,  told the Greek Reporter.
“Not many people know Thessaloniki as a destination. When you talk about Greece people think of places like Santorini and Mykonos. We want to make sure people know about Thessaloniki,” she emphasizes.
There is a highly-regarded Jewish Museum in the city which traces the history of its people, going back some 2,000 years. Thessaloniki was home to a major Jewish community as part of its cosmopolitan makeup, who were mostly of Sephardic origin, until the middle of the Second World War.
It is the only known example of a city of this size in the Jewish diaspora which retained a Jewish majority for centuries.
Sephardic Jews immigrated to the city following their expulsion from Spain by Christian rulers under the Alhambra Decree in 1492 and experienced a golden age in the 16th Century, building their culture and adding to the Greek city’s rich cultural fabric.
In the middle of the nineteenth Century, Jewish educators and entrepreneurs came to Thessaloniki from Western Europe to develop schools and industries and brought contemporary ideas from Europe which changed the culture of the city.
With the development of industry, people from both Jewish and other ethnic populations became industrial workers and Thessaloniki developed a large working class, with labor movements contributing to the intellectual mix of the city. After Greece achieved independence from the Ottoman Empire, it made Jews full citizens of the country in the 1920s.
During World War II, the Nazis occupied Greece in 1941, and began to persecute the Jews as they had in other parts of Europe. In 1943 they forced the Jews of Thessaloniki into a ghetto near the rail lines, and started deporting them to concentration and labor camps, where most of the 60,000 who were deported died.
This resulted in the near-extermination of Thessaloniki’s Jewish community. Only 1200 Jews live in the city today.
Thessaloniki has a diverse background of cultures, and Mayor Yannis Boutaris has also attempted to lure Turkish tourists by creating a museum at the birthplace of the founder of the Turkish Republic, Mustafa Kemal Ataturk – who drove Greeks out of Asia Minor a century ago.
This move has understandably created opposition from nationalist groups, but city officials believe it will be a major attraction for the city.
With Turkish Airlines using Thessaloniki as an important link between Turkey, Asia and Europe, the city is growing in prominence internationally and drawing more tourists from around the world. Officials are organizing press trips to bring in journalists, particularly from Germany, Turkey, Italy, France and Israel, as well as and arranging for the filming of documentaries.
“We are not only trying to define ourselves with Turkey and Israel because Thessaloniki has a very old history of 2300 years and everybody should come,” said Tsatsouri.
There’s plenty to see and do in this ancient, yet vibrant city, from religious tourism to fifteen different cultural monuments recognized by UNESCO, to its famed White Tower.