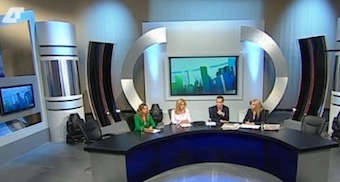 Two months after the government turned off the public television network and fired all 2,656 of its workers in an economy move, the interim station began airing news programs on Aug. 21 and the European Broadcasting Union (EBU) stopped streaming pirate signals from the deposed workers who stayed at their posts.
Prime Minister Antonis Samaras’ decision to shut down the broadcaster known as ERT drew international condemnation but he ignored it. The government is setting up a permanent replacement to be called NERIT and recruiting workers, including those from the ranks of those let go.
The interim station has bee showing only old documentaries and films and was set up to get around a court order that ERT’s signal had to be restored. ERT unionists, however, said the sacked workers would continue their programing via the Internet.
Greek authorities recently announced that more than 500 people had been hired on a two-month contract for Greece’s new interim state broadcaster, which so far has born the simple logo of Public Television.
Its first news program, a two-hour broadcast that began at 8 a.m., focused mainly on the analysis of domestic news by a panel of journalists, but also included international news items based on the BBC website and al-Jazeera footage.