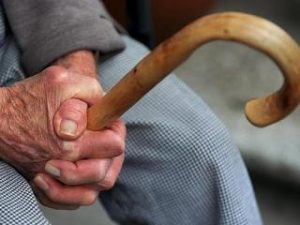 More and more Greek families are relying on their elderly relatives’  pensions. With soaring unemployment and reduced salaries and allowances, pensions of a few hundred euros retirees receive every month can make the difference to the family budget.
In some other cases, relatives cannot afford the expenses of a nursing home and decide to take care of their elderly relatives in need. These are the main causes behind the mass “emptying” recorded lately in nursing homes across the country.
“There’s intense mobility,” the President of the Greek Association of Care Units for Elderly (P.E.M.F.I.) Stelios Prosalikas noted. “Many people decide to take the elderly home to take advantage of their pensions and make ends meet.” This is not a decision that is taken lightly. “The fact that a person is in a nursing home, means that it is a severe case requiring special care. But people seem to be prepared to surpass themselves and undertake care so as not to pay the nursing home,” he explained.
In Greece there are about 100 private care units for the elderly and about 100 units operated by non-Governmental Organizations. Their total capacity reaches 15,000 people. According to Prosalikas, before the crisis, the fullness of these units reached 100%, with an increasing pressure to increase their capacity. Today this fullness exceeds 80%. “Once the number of the care units was considered small against the requirements of the country. Today there are empty seats almost in every nursing home.”
For many, however, the withdrawal of an elderly person from the nursing home is not a de facto option. These are the most severe cases of advanced dementia or Alzheimer that require 24-hour residential care. “There are no state structures for dementia and people do not have any other options,”  Kostas Frouskas, a psychologist and director of the specialized unit for dementia Aktios told the Greek newspaper Kathimerini. “Only if someone became unemployed he  would take the risk of the exclusive care of an elderly person at such a stage.” However, he said, many people choose less expensive units or they transfer the elderly person from a single to a double or triple room in order to reduce the cost.”
In any case, everything will depend on the course of the economic crisis. “The withdrawal of elderly people from care units has emerged as a “solution” to the problem of unemployment,” Prosalikas concluded. “Besides, most unemployed people in our country live off  their parents’ or grandparents’ pensions rather than off their special allowances. If unemployment is further increased, the tendency to empty nursing houses will be intensified.”