Maria Menounos in the Ring 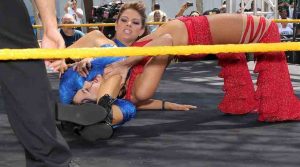 Maria Menounos showed her wrestling skills on August 18 in the annual show for the WWE’s Summerslam Axxess in Los Angeles.

Wearing a tiny, sexy glittering bustier with the Greek flag and skintight blue leggings of the same glittering material, as well as black wrestling boots, the television personality of Greek origin climbed into the ring and won the female wrestlers Brie Bella and Eva Marie.

Menounos is not a professional athlete or wrestler, but works out every day and successfully entered the world of wrestling in 2009, when she made her debut.