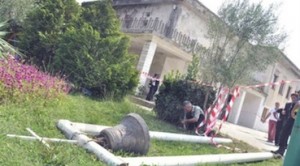 Scenes of brutality against clergymen took place on August 17 at the Church of the Virgin Mary in Përmet, a town in Albania, capital of the Përmet District.

The clergymen of the Metropolis of Gjirokastër of the Orthodox Autocephalous Church of Albania complained that paramilitary groups, with the support of municipal staff and the coverage of the municipal authorities incited violence against the clergymen and the people of Përmet under the pretext of performing a supposed court case.

A group of municipal employees emptied the church of its sacred vessels and icons while they even took the bell.

The clergymen in their announcement talk about, “Violation of every notion of democracy, human rights, especially of the right that concerns the free exercise of faith,” while they denounced that, “The faithful were violently obstructed from entering the Church and exercise their religious duties on the pretext of enforcing judicial decisions. Sacrilege took place as vandals stole religious icons, cult, utensils etc.”

However, the Greek Embassy and the Greek consular authorities have received instructions by the Greek Foreign Ministry to watch the case closely, while the Ministry strongly reacted against the violent incident.

In his announcement the representative of the Foreign Ministry Constantinos Koutras expressed his deep concern and described as unacceptable and condemnable acts the forcible expulsion of clergymen and the sealing of the church that took place the very next day of the celebration of the Assumption of Mary.