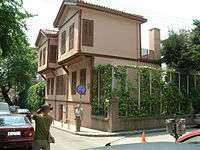 With the backing of Mayor Yiannis Boutaris, the Kemal Ataturk Museum has been inaugurated after its restoration in Thessaloniki and stands as a monument to the man under whose authority Turkey defeated Greece 89 years ago and drove it out of Smyrni. Boutaris said the historic significance of Ataturk should be remembered.
The house is the birthplace of the founder of modern Turkey, Mustafa Kemal Atatürk, who was born there in 1881. It is a three-floor house with a courtyard on 24 Apostolou Pavlou Street, next to the Turkish Consulate.
Before the Greek army won back Thessaloniki, the area was known as the Koca Kasım Paşa district, Islahhane Street.. It was built before 1870 and in 1935 the Thessaloniki City Council gave it to the Turkish State, which decided to convert it into a museum dedicated to Mustafa Kemal Atatürk.
The building has three floors and a courtyard. It was repaired in 1981 and was repainted to its original pink. Most of the furniture is authentic. Any missing items were replaced with furniture from Kemal’s mausoleum and from Topkapi in Istanbul. There are photographs on all the walls of Kemal at various periods of his life.
There are four rooms on the ground floor, none of them of much interest to visitors. On the 1st floor is the reception room, with European sofas, a large console table, and a chased brazier; a large sitting-room, with low banquettes around the walls; Kemal’s mother’s room, with a bed, a banquette, and a trunk; and the kitchen, equipped with contemporary cooking utensils.
The most impressive room on the 2nd floor is the one in which Kemal was born, a large room with a banquette, his desk, and a large brazier. It faces another room, in which some of Kemal’s personal effects from Ankara are displayed. These include formal dress, smoking requisites, cutlery, cups, and other items. All the documents relating to Kemal’s schooldays have been hung on the walls. A pomegranate tree planted by Kemal’s father still grows in the courtyard.