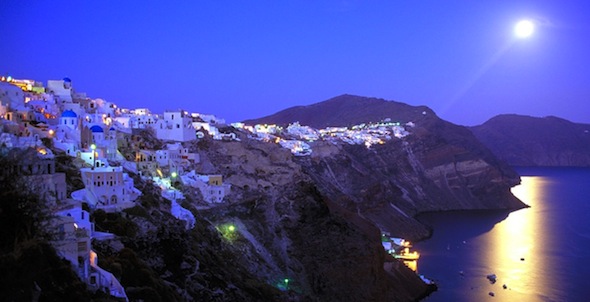 Several cruise lines have changed course after a power station fire caused an island-wide blackout Tuesday on Santorini.
MSC Cruises Fantasia and Pullmantur’s Zenith, both scheduled to call on the Greek island today, came up with alternative plans because services for passengers, including shops, restaurants and the famous cable car, weren’t working. Fantasia went to Mykonos, representatives from the line said, and Zenith proceeded to Heraklion in Crete.
Ruby Princess and Holland America’s Noordam were docked in Santorini Tuesday when the electricity went out. Passengers who were stranded at the top of the hill when the cable car stopped were brought down by bus, spokeswoman Karen Candy with Princess Cruises said. “All tours returned back on time and the ship sailed as scheduled.”
Cruise Critic is waiting to hear from Holland America to see how their passengers coped. Celebrity Cruises is scheduled to call on the island Thursday, and Cruise Critic has reached out to ask about itinerary changes to Reflection.
Wire services report that generators and repair equipment arrived today at the Greek island, which draws up to 150 cruise ships and 120,000 visitors during the current peak tourist season. Officials quoted in an AFP story said that the outdated electrical grid on the Greek islands undergoes stress in the summer.
Mayor Nikolaos Zorzos told the news source that generators and repair equipment arrived Wednesday morning and that the situation is improving “by alternating the power flow to different areas.”
(source: cruisecritic)