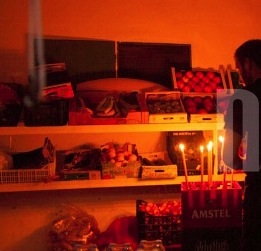 Set to welcome a record 1.9 million tourists this year, Santorini’s big year ran into a problem on Aug. 13 when a fire broke out at a Public Power Corporation (PPC) station, creating a power failure that continued into the next day.
The island was plunged into darkness at the worse moment for the shopkeepers happy to see people returning after a disappointing 2012 and leaving record crowds to have warm beer and dinner by candlelight across the island, as well as on the tiny adjoining island of Thirasia.
There were a reported 150,000 tourists on the island at the time.  Efforts to repair the problem started immediately. The PPC managed to give power to the airport and to the health center, while at night started the gradual re-electrification of the island, thanks to the backup generator sets.
The Navy Ship Chios brought generator sets with total capacity of 10MW. Generators with capacity of at least 5 MW will be transferred to Santorini from Rhodes, Crete and Paros. Also, the cargo ship Horizon brought to the island a special crane for the installation of the generator sets.
The Mayor of Santorini Anastasos Zorzos, expressed his hope that the power would be fully restored by nightfall on Aug. 14. The residents and the shopkeepers of the island tried to cope with the darkness as best they could. Some lit candles, while others closed their taverns and shops. Residents and restaurant owners, however, were worried about losing food stuffs with the refrigeration shut down.