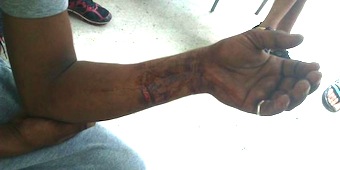 The Greek authorities must act immediately to curb the growing spate of xenophobic and racist attacks Amnesty International said today. It follows a brutal knife attack by a mob of around 20 men on two Pakistani migrants on the island of Crete in the early hours of yesterday morning.
The two young men approached Amnesty International for help, saying they were too scared to report the matter to the police or seek medical attention for fear of being deported.
“At the same time as we’ve seen a spike in xenophobic violence around Greece, the lack of laws to protect victims with irregular status has meant that reporting such crimes can result in the victims being deported while their attackers walk free,” said Jezerca Tigani, Deputy Europe and Central Asia Programme Director at Amnesty International.
“This only contributes to the general climate of impunity for the perpetrators of such attacks and it allows for an acceptance of these horrific crimes.”
Hours before Tuesday’s attack, the far-right political party Golden Dawn held a meeting in Irakleio. The party’s anti-immigrant message has grown in popularity at the same time as xenophobic and racist attacks – some of them deadly – have been proliferating across Greece.
The victims of the attack told the organization they were walking along a street in the town of Irakleio in the early hours of Tuesday morning when around 20 men dressed in black surrounded them with cars and on motorbikes. After asking where the migrants were from, the mob attacked them without any provocation, stabbing them before throwing them to the ground and kicking them.
Amnesty International members arranged medical help for the victims after they sought assistance from the organization on Tuesday afternoon.
“We found ourselves in a tragic situation where we could not report the incident to the police or get the victims to the hospital because they were scared of being deported due to their irregular status,” said Katerina Chasouraki, an Amnesty International coordinator in Crete.
The men received medical treatment and are recovering from the incident, but photos show the deep gashes they sustained – to the forearm and chin – as well as bruise marks along their sides where their assailants kicked them.
At the end of last year, special police units were set up to tackle racially motivated crimes in Greece, but there is still no provision that would protect victims who are in an irregular situation from arrest and deportation during the investigation of such crimes.
“The Greek authorities must do more to bring an end to these racist attacks, and to ensure that migrants are not further victimized by being at risk of detention or deportation when they report crimes or seek medical assistance,” said Jezerca Tigani.
(source: amnesty)