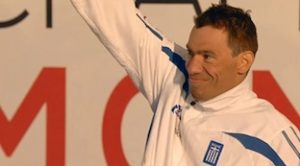 In the same sport two more Greek athletes got positive results. Apostolos Tsaousis terminated fifth in 1:40.78 and Andreas Katsaros sixth in 1:41.41. Regarding Costakis the performance that ranked him third was not the same as in the preliminary round (3:55.45) but  the 3:52.31 time gave the Greek swimmer the bronze medal.