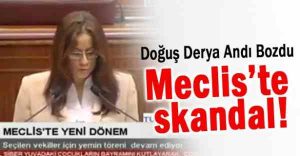 The 35-year-old Doğuş Derya, of the Republican Turkish Party (CTP), founding member of the feminist workshop FEMA and the first feminist “MP” of the occupied territories in Cyprus, provoked an upset at the inauguration of the pseudo-Parliament as she decided to read her own oath, instead of reciting a traditional reading for lawmakers.

The attendants of the pseudo-Parliament left, while Derya was shouted down. The acting “President” did not allow her complete her oath and interrupted the session for five minutes, while the state television BRT stopped the live streaming.

Derya said that she will work so that anyone who lives in Cyprus will not encounter discrimination because of language, religion, race, place of birth, social class, age, physical condition, gender and sexuality.

“We try to create a fair and equal system for all who will not exploit the worker. I will strive to replace the culture of violence and confrontation with the values of peace and approach; I will stay devoted to the principles of a democratic, socially fair state and of human rights and freedoms. I swear to the price of humanity that I will not abandon the ideals for establishing a federal Cyprus,” Derya stated.

Answering journalists’ questions, Derya said that the current oath has been written in a very phallo-cratic language and that it must be updated in accordance with the contemporary requirements. This is why she chose to read a more modern oath, as she said.

Transmission of Covid-19 has skyrocketed in Greece once again, as the country recorded a stunning 2,147 cases on Tuesday.
Europe