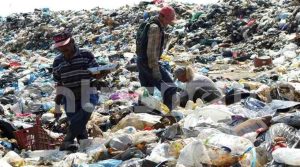 The news of a dead baby found in the dump of Lechaina, has shocked the local community  of Ilia in Western Greece.
The horrible crime was revealed when a rag-man detected the lifeless body of the newborn baby among hills of garbage. The unfortunate little boy, whose body was in advanced stage of decomposition, was wrapped in a white sheet.
The police arrested a 20-year old woman, who allegedly abandoned her newborn boy in the trash, while her 44-year old mother is reportedly her accomplice. According to information, the police investigations, as well as the young woman’s arrest, took place in the region of Neochori in Kyllini.
The municipality garbage truck had just emptied the trash and a group of Roma started looking through the garbage for something valuable or for materials to be resold for recycling. One of them spotted the white folded sheet and pulled it to get a better look at it, when he saw the unfortunate baby. He immediately informed the police, which arrived on the scene within a few minutes.
The baby was transferred to a hospital in Patras for autopsy, while the police started investigation for clues that will lead them to the heartless  parents.
According to the findings of the forensic examination, the baby was born alive about two days ago after nine months of pregnancy. The baby had  head injuries, which according to estimates might have been caused during his birth or while thrown in the trash.