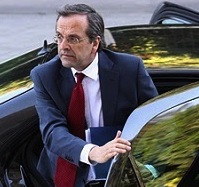 Glowing after meeting U.S. President Barack Obama in the White House on Aug. 8 and meeting with Diaspora leaders in New York as part of a visit to the United States, Greek Prime Minister Antonis Samaras is getting ready to go back.
Samaras is reportedly going to return for the opening of the United Nations General Assembly on Sept. 23 and use the opportunity to visit other parts of America. His meeting with Obama came with the U.S. government out of session and when Washington’s political season was dormant.
Samaras may return to Washington and is said to be planning side trips to other cities this time, including Chicago or Boston.
Samaras plans to meet key figures from the US House of Representatives and the Senate when he visits Washington in September. Congress was not in session when Samaras met Obama, leading some critics to say the meeting was just a symbolic photo opportunity.
A meeting with International Monetary Fund managing director Christine Lagarde is also likely. The IMF is one of Greece’s Troika of lenders, along with the European Union and European Central Bank, which is putting up $325 billion in two bailouts to save the Greek economy on condition of harsh austerity measure in return.
Samaras, the New Democracy Conservative leader,  is due to be accompanied on his trip by his Deputy Prime Minsiter/Foreign Minister Evangelos Venizelos, the PASOK Socialist leader who jumped at the chance to join the coalition government with his party disappearing in the polls. He will arrange a separate set of meetings.