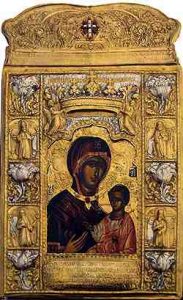 According to the tradition of the Orthodox Church, the miraculous icon of Panagia Soumela that is located in the homonymous Holy Church in Vermio, northern Greece, is a work of the Apostle and Evangelist Luke.
Etymologically, the name of the icon and the monastery derives from the name of the mountain, where it is built on, which is called Mela. In Greek, ‘stou mela’ means ‘at Mela’, and in the Pontic dialect it is pronounced ‘sou Mela’. Therefore, Panagia at Mountain Mela.
In 386 A.D., two Athenian monks, Barnabas, and his acolyte Sophronios, founded the Monastery on Mount Mela in Pontus of Asia Minor, a region in current day Turkey, after they were called by the Virgin to do so. At Mt. Mela, the icon was found at the end of the fourth century A.D. in a cave, and the monastery was built at this place for the glory of God. The icon was renamed Panagia Soumela.
According to tradition, the Holy icon of Panagia Athiniotissa, which was iconographed by Luke the Evangelist, was transferred there by angels.
At various times, thieves and men of different religion raided the Monastery, because of its richness and reputation. There are many relevant references on the miraculous intervention of Virgin Mary for the Monastery’s salvation.
In 1922, when Greeks of Asia Minor and Pontus were driven from the lands of their ancestors, the monks hid the icon of Panagia Soumela painted by Evangelist Luke, the handwritten Gospel copied on parchment by St. Christopher, and the Holy Cross with the honorable wood donated by Emperor Manuel Comnenos, in the chapel of Saint Barbara.
At the time, the holy icon was buried for around thirty years in the sacred soils.
In 1931, Metropolitan Polycarp of Xanthe and the Minister Polycarp Psomiadis asked for the intervention of the then Greek Prime Minister, Eleftherios Venizelos, in order to liberate the icon.
The request was approved by the then Turkish Prime Minister Ismet Inonu, after Venizelos asked for his permission to send monks to the Mt. Mela monastery to retrieve the icon and the other sacred treasures.
Father Ambrosios, who was one of the monks of Panagia Soumela, was chosen by the Metropolitan Chrysanthos of Trabzon to undertake this special journey. Father Ambrosios set out to go to Turkey on October 22, 1931. Turkish soldiers and Greeks helped, so that the holy items would be found.
Soon the hidden icon was unearthed along with the other sacred objects. They were all returned to Athens and deposited at the Byzantine Museum of Athens, until 1951, when the Panagia Soumela Foundation was founded in Thessaloniki in 1951 by Dr. Philon Ktenides.
In 1952, the holy icon was officially enthroned in the Holy Church, which was built in Her honor on a site amid the Macedonian mountains in Greece, that is Kastania of Vermio.
About forty years later, in August 1993, the Cross and the Gospel of St. Christopher were delivered by the Byzantine Museum of Athens.
The icon of Panagia Soumela, constitutes a symbol of the Greeks of Pontus, who resort to it in order to relieve them from their problems and sufferings.
Every year on the 15th of August, which is the feast day of the Dormition of Theotokos, thousands of pilgrims from around the world travel to this Monastery at Mt. Vermion to venerate the holy icon.
At the Monastery of Panagia of Mount Mela in Pontus, on the 15th of August 2010, hymns and prayers were heard for the first time after 88 years.
Ecumenical Patriarch Bartholomew took the lead of the Divine Liturgy. It was with his actions that this unique opportunity for Hellenism was made possible.
The event took place again in 2011 and 2012.