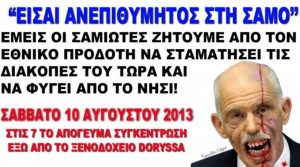 Former Greek premier George Papandreou’s stay on the island of Samos hasn’t been a welcome one for him with residents angrily demanding he leave, unhappy that he had put big pay cuts, tax hikes and slashed pensions on the populace while in office.
Many residents gathered in a tavern on the island and said they were upset to have him in their midst and staying there.
A poster appeared depicting Papandreou as a bloodthirsty zombie. The poster had the title: “You are unwanted in Samos”! We, residents of Samos ask the national traitor to stop his holidays now and leave the island.”
The creators called for a protest rally the night of Aug. 10 outside the Doryssa Bay hotel where he was staying. The inspiration for the poster was a report, accompanied by photographs that showed Papandreou enjoying seafood dishes in a restaurant on the island. Samos is one of his favorite vacation spots and he stayed there last year.
After being hounded out of office in 2011 after only two years in office, Papandreou returned to be a back-bencher in the Parliament but spent most of the previous year lecturing at Ivy League colleges in the United States and going on a lucrative lecture tour making money explaining why his government failed.