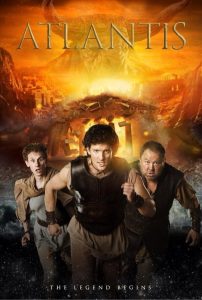 The first official poster for The BBC’s Atlantis, features Robert Emms (Kick-Ass 2) as Pythagoras, Jack Donnelly (Misfits) as Jason, and Mark Addy (Game of Thrones) as Hercules with Greek mythology becoming even more popular as films and for TV projects.

BBC published the first poster for BBC’s brand new series Atlantis, which is coming soon to BBC One. The poster shows the three main characters, Jason, Pythagoras and Hercules. Mark Andy from the legendary TV series Game of Thrones is said to play in Atlantis as well. Andy is going to play Hercules.

Atlantis is a forthcoming British fantasy-adventure television program, inspired by greek mythology and created and written by Howard Overman (Misfits and Vexed). It is produced by Howard Overman, Johnny Capps and Julian Murphy for their new production company.

The synopsis of the series describes the story: “The city of Atlantis is a strange, ancient dwelling; a world of bull leaping, of reptile haired goddesses and of palaces so vast it was said they were built by giants. Young Jason arrives in the city and a magical adventure begins.”

Shooting on the 13-part series will begin in April in Wales and Morocco.