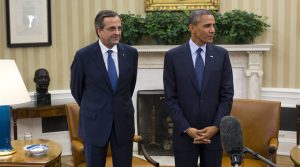 The Washington Post wrote of Obama’s advice for Greece to promote growth instead of relying on austerity demanded by international lenders in return for $325 billion in two bailouts that have failed to right the economy.

The Financial Times reported that Obama praised Samaras for his “bold and difficult action” and said the US would support Greece and its people so they can “see the light at the end of the tunnel”. But he added: “It’s important that we have a plan for fiscal consolidation to manage the debt, but it’s also important that growth and jobs are a focus.”

The New York Times gave good coverage to the meeting but the German press wasn’t as kind, taking shots at Obama’s position in some cases. German Chancellor Angela Merkel, who face re-election in September, is a strong backer of the bailouts but only on the condition of unrelenting austerity.

Die Welt characteristically wrote that the support of the U.S. President towards crisis-stricken Greece wasn’t well received by the German government. Der Handelsblatt referred as well to the praise of efforts by Obama toward Samaras over austerity which the U.S. backs as it wants to prevent any unease in the markets or on Wall Street.

The online version of Wall Street Journal Deutschland, Sueddeutsche Zeitung and Stuttgarter Zeitung also seemed to highlight that the U.S. President has in public supported debt-crunched Greece. The German newspapers also speculated on whether Greece will try to stick its public lenders – Germany is the biggeset – with losses on loans as it did to private investors in 2011.