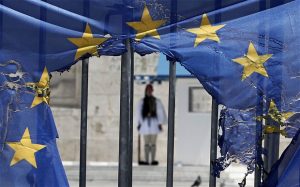 With Greece’s unemployment at a record 27.6 percent and 64.9 percent for those under 25, the British newspaper the Telegraph has likened the economic catastrophe to what Kosovo was like, comparing Greece to its northern neighbor.

The Telegraph opened its article on Greek unemployment rise by quoting Professor of Economic Theory at the University of Athens Yanis Varoufakis’s words: ““Nothing as devastating as this has ever been seen in my country before. The spirit of the Greek people has been broken. They’ve stopped demonstrating and are licking their wounds at home or leaving the country.”

The jobless rate in Greece will not cease to rise as the Greek government decided to dismiss 15,000 public sector workers by the end of September on the orders of international lenders.

“The manic attempt to keep Greece in the Eurozone under conditions that are not sustainable is turning the country into a sort of Kosovo, an EU protectorate that produces little but surplus labor,” Varoufakis added.