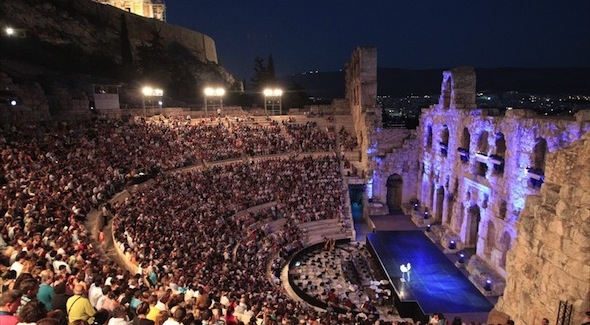 The 23rd World Congress of Philosophy opened in Athens on Sunday evening with a concert held at the Odeon of Herodes Atticus at the foot of the Acropolis hill.
Greek organizers warmly welcomed thinkers from across the world to the land of Socrates, Plato, Aristotle and birthplace of philosophical thinking to the rhythm of classic works and the music of world known Greek composers Manos Hatzidakis and Mikis Theodorakis.

The international meeting, organized by the International Federation of Philosophical Societies every five years. is hosted in Greece for the first time in a difficult period for the debt-laden country and several countries across the globe.
During the event which runs to August 10, some 3,000 participants from more than 100 countries, including Chinese scholars, will exchange views on the main theme of the congress which is “Philosophy as inquiry and way of life.”
The theme recalls Socrates’ declaration that “an unexamined life is not worth living.”
Over the next five days, distinguished intellectuals of our time, such as Jurgen Habermas and Umberto Eco, will examine life and discuss the role of philosophy and philosophers today in the resolution of issues affecting humanity.
Several of the debates will be held at sites of great historic interest, namely Plato’s Academy, Aristotle’s Lyceum and the Pnyx, the meeting place of the ancient Athenian Parliament.
The event is supported by many ministries and organizations, such as the Greek National Tourism Organization, since it is regarded as an opportunity for recession-hit Greece to showcase its best image amidst difficulties, according to Constantinos Voudouris, President of the Greek Organizing Committee.
(source: Xinhua)