Piraeus Shows Off in Marseille Events 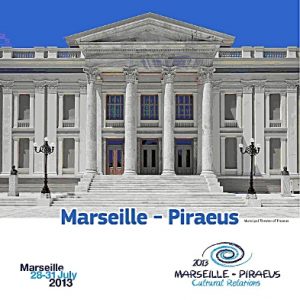 As part of the celebrations of Marseille as European Capital of Culture for the year 2013, the Municipality of Piraeus, which has been its sister city since 1984, participated in the events that were held on July 28-31.

There was a rich program of actions, including exhibitions of painting, woodcarving, video projection on the contemporary face of the city of Piraeus with a collection of slides and old photographs of the city’s history in the 19th and 20th Century.

A theatrical performance by the Roberto Zucco theater, as well as a dance performance by the group FOS (Light), based in Piraeus, took place. The events culminated with a Greek feast by the orchestra of Vasilis Tsitsanis, with songs by Nena Venetsanou and Popi Asteriadi and with Greek gastronomy.

The events’ opening at the events hall of the Marseille Town Hall was launched on July 28 by the President of the Organization of Culture, Athletics and Youth of the Municipality of Piraeus, G. Sigalas. From July 29, Mayor of Piraeus, Vassilios I. Michaloliakos attended the events as well.

During the events’ opening, Sigalas referred to the particular bonds between Greece and France through the centuries of history, to the financial development of commerce and shipping between the ports of Marseille and Piraeus, as well as to the contribution of the memorable Melina Mercouri to the institution of the Capital of Culture.