GRNews
GreekReporter.comGreeceWhat Didn't Ancient Greeks Eat and Were So Clever?

What Didn't Ancient Greeks Eat and Were So Clever? 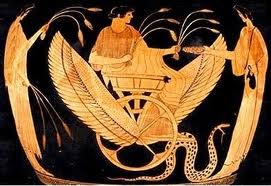 Modern science has repeatedly studied ancient writings to find more about the diet of ancient Greeks and to answer a seemingly simple question: Why were ancient Greeks so clever?
For many, there is only one answer to this question and is based on the principles established by the father of western medicine, Hippocrates of Cos, who used to say: “Νοῦς ὑγιὴς ἐν σώματι ὑγιεῖ” meaning a healthy mind in a healthy body.
Dimitra Tillianaki, a dental surgeon, studied the diet in the times of Hippocrates and Pythagoras in her effort to find an answer to a really nagging question: “Why regardless of the development of science are there so many diseases? Cancer, cardio-cerebrovascular and autoimmune diseases?”
Tillianaki, in her holistic human approach, discovered that following a healthy lifestyle is not always enough, and there are certain nutritional mistakes we make and do not realize them.
First of all, we eat bread and spaghetti, which means wheat. And what’s wrong with wheat? Gluten. A protein composite that is everywhere in the modern diet and keeps the brain “sleepy.” Ancient Greeks, on the other, did not even know the taste of wheat, because it didn’t exist. They cultivated Zea, a cereal rich in magnesium that is considered to be the food of the brain.
“It is possible that ancient Greeks were so clever because they did not eat wheat which contains gluten, a substance which sticks the nerve endings and doesn’t leave the brain free to think and create, ” Tillianaki said.
Zea also contains amino acid Lysine, which strengthens the immune system and has very little gluten.
“Zea was cultivated in Greece until the 30’s when it was suddenly banned. It is still unknown why the authorities decided to ban the cultivation of this particular cereal which was then gradually forgotten by the Greeks,” she added.
Regarding meat consumption, it was minimal and only if the person was healthy. If there was any kind of illness, a person wouldn’t eat meat.
The Pythagorean diet was based on the Hippocratic diet, except for meat consumption, which was strictly forbidden by Pythagoras.
In antiquity, there was also a large consumption of an orange fruit, Hippophaes, otherwise known as the sea buck-thorns. Hippophaes contains 192 vitamins which are all absorbable by the body.
Hippophaes formed a significant part of Alexander the Great’s and his troops’ nutrition, who had actually noticed that sick or wounded horses would heal by chewing the plant’s leafs. In this observation lies the Greek etymology of the word Hippophaes, which stands for “ippos” (horse in Greek) and “phaos” (shiny in Greek). After this discovery, Hippophaes became an essential stimulant for warriors in all military campaigns, offering greater endurance and strength.