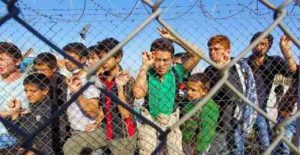 Overcrowded inflatable boats of questionable stability carry every day downtrodden citizens of other countries to countries which are considered to be the “Land of Promise.” Many of them get lost at sea and others arrive to some land. Everyone wants to start a new life away from civil wars, poverty and oppression.
The images are known. They take place in Malta, on Greek islands and on the Italian coasts. Only the first six months of 2013, some 8,500 refugees arrived on the coasts of Italy and Malta, which are inhabited by 415,000 people.
Greece faces the same difficulties. Refugees arrive in Greece both by sea and from the common land borders with Turkey. This is the reason that the Greek Presidency will have immigration as one of its priorities for the first half of 2014.
“The countries with external borders of the EU have surpassed their endurance. But this does not justify the serious violations of human rights,”   said Karl Kopp, spokesperson for human rights organization Pro Asyl.
It is characteristic that the European Court condemned Malta to pay compensation to a Somalian woman who was severely mistreated as she was exposed to extreme cold and heat without being allowed to go out during her detention awaiting her deportation. The court in the condemning decision, spoke of inhuman and degrading treatment.
What should the EU do for those countries which bear the greatest burden? Until today the problem was transferred from one country to the other. For example Spain made access to the Canary Islands more difficult.
In Greece, Frontex has undertaken the guarding of the European borders. In a few words, the immigrants are sent from one place to another like a ping-pong ball. According to the Dublin II Regulation, immigrants who apply for an asylum in Italy, for example, in order to travel in Europe, have to return to the country they first made their application. Even if they manage to reach northern Europe, they are finally sent back to the first country of entry.
From early June, the new common immigration policy will be applied, according to which, a common asylum procedure and a commonly recognized legal status for those who are given asylum is provided. The aim is to ensure common conditions and a common level of protection for immigrants. The decisions should be respected, something that no country is well prepared to do and especially the smaller ones, such as Malta and Cyprus. Kopp from Pro Asyl made some specific proposals.
“Instead of the incarceration of these people in prisons built with European money, more human spaces should be funded for the accommodation in Greece and imprisonment should be abolished,” he said.
“And then women, children and helpless people should be promoted with humanitarian criteria across Europe. They should be given the chance to leave Greece in a lawful way; this would be an act of solidarity.”