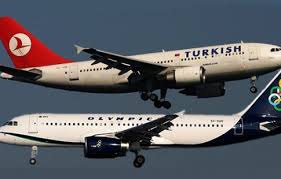 According to Turkish media, a proposal has  been officially submitted for the sale of the 100 percent of Olympic Air to the the national flag carrier airline of Turkey, Turkish Airlines.
Under the deal, Olympic will reportedly keep its name and brand but only for two years, along with its flight operations, crew and staff but then it will take on the name Turkish and the staff and crews will wear Turkish uniforms.
Temel Kotil, President and CEO of Turkish Airlines told the newspaper Zaman that the offer is by 19 million euros larger than Aegean, Greece’s largest carrier, offered for Olympic, once the national airline of Greece and founded by the late shipping tycoon Aristotle Onassis.
Specialists in competition issues expressed reservations concerning Aegean’s bid, which, according to the Financial Times and CNN Turk, seemed unlikely  to be enough, especially with anti-monopoly concerns from the European Commission. It was also reported that Aegean is next on the list for acquisition by Turkish Airlines which would leave Greece with no major airlines of its own.