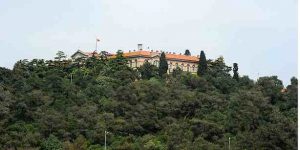 The long-pursued demand by the Greek community in Turkey concerning the reopening of the Greek Orthodox Seminary on Heybeliada, will be possibly fulfilled. This is what Justice Minister,  Sadullah Ergin, said.

“The reopening of the Halki Seminary is among the many topics currently being discussed. We will all see the results. It is a political decision. The Halki Seminary might be opened,” as Minister Ergin said on July 31.

Fener Greek Patriarchate spokesperson, Father Dositheos Anagnostopoulos, said that Ergin’s statement is good news, but what matters more than if the school will reopen is how it will reopen.

“This is great news, but I would like to know in what way they are opening it,” Anagnostopoulos told the Turkish newspaper Today’s Zaman.

“We haven’t had an open dialogue with Ankara. We have let them know that we want the school to function as it did before. In what way are they opening it?” he added. He concluded, “This is nice, it is hopeful, but what matters is how it is going to be.”

Anagnostopoulos also said that it is unlikely that the school will be open soon because Orthodox schools traditionally open on September 1 every year, “I don’t think we could make it Sept. 1 this year, even if it was passed,” according to his words.

“I hope it opens, but students will have to be enrolled, professors will have to move from abroad and there is a lot of  bureaucracy there with permissions from Ankara,” the spokesperson explained.

As far as Halki Seminary is concerned, it was established in 1844 on the island of Heybeliada off İstanbul, and was closed in 1971 under a law that placed religious and military training under state control, as reported in Today’s Zaman.

The EU and the US frequently criticize Turkey for not reopening the Halki Seminary, a decision which experts say is related to Turkey’s interpretation of secularism.