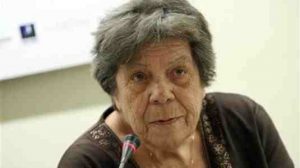 In the early hours of July 30, director Alinda Dimitriou passed away at the age of 78. Alinda Dimitriou was an important artist from the left political spectrum, renowned for her consistency and her political opinion, who excelled in the field of documentaries, leaving her descendants a unique and amazing work of artistic and sociopolitical value.
Her best known work is the trilogy of documentary movies about women in resistance  during the civil war and the junta: Birds in the swamp, Among the Rocks, and The Girls of the Rain.
The Thessaloniki Film Festival expressed its condolences to the amazing creator’s beloved.
“A consistent creator, with political and social positions, which are expressed in her work, Alinda Dimitriou has deepened the role of women in the political struggles,” the Festival representatives mentioned in an announcement.
“It is a big loss in the field of documentary, which she served with passion and consistency,” said the Festival representatives.
Excerpts of an interview of Alinda Dimitriou to Alpha Radio in 2012:
“Rocks, swamps and rain…those were the elements of nature going hand in hand with the woman of the resistance, as well as of the democratic army and of course, of the junta. Today, we don’t have even those things. They sell out everything.”
“It is certain that we will move forward. Even with slow steps. History doesn’t go back. We may think that we are at a standstill, as historical time isn’t recognized as a movement while it occurs. But history moves even if we do not realize it when it occurs. Young people will take the baton!”
“I really believe in today’s kids. But it needs time. Don’t hurry. History has its own steps…they are slow, though. But it moves. We should not fool ourselves.”
“When I was 12, my father, shortly before being caught by the Germans, took me on his knees and sang to me, “Olympus thunders, Giona flashes” (title of a Greek song of the resistance). And from then on, everything in my life was clear, both regarding my personal path and my political beliefs.”
“I can’t go into a dialogue with the parties of the government, and not only with them. I can’t. I don’t understand what kind of people they are. If you haven’t learned to speak until five, am I to teach you? No. I want dialogue as an interlocutor, not as a teacher. And how do you speak with people who do not know how to speak? You know, we think that the problem is what they say. Yet, the problem is that they do not even know how to speak!”
“We have to become young, someday. This is the time. We need the momentum of the young people, because things are exactly as seen by a small kid: black or white. This is how it is now. We should understand it and each one has to make his choice. But he should choose as a young, really young, though.”
“Do not be discouraged! Head up high and we move on. He go up, we go up…”