No Break In Tsochatzopoulos Trial 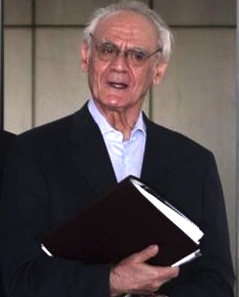 The Felony Appeal Court has rejected a request from former defense minister Akis Tsochatzopoulos for a summer break in his ongoing trial on money laundering and corruption charges. He has been held in detention since April fo 2012.
His defense team said that Greek courts traditionally don’t meet in August but Presiding Judge Christos Katsianis  said there will be no let-up in Tsochatzopoulos’ case, leading his lawyers to complain the court had overstepped its authority. “There are no trials in August,” they said. Most Greeks take their holidays in August and the courts usually close.
Katsianis told Tsochatzopoulos and his co-defendants to be ready to testify, although the former minister’s lawyer said that, “There is very little time” and that “it is humanly impossible for Tscohatzopoulos to testify is such a short time,” before repeating the request to summon the members of the Government Council of National Defense (KYSEA) to testify in court.
Prosecutor Panagiotis Panagiotopoulos said in such high-profile cases where there is an immense interest, it is not possible to maintain the “usual rhythms,” although Tsochatzopoulos’ defense team reacted dismissively towards a 2011 law allowing the “fast-track” of important cases.
Tsochatzopoulos stated that the court is not interested in the “essence” of the case and claimed he would not have a fair trial, nor could he imagine the court “looking into the KYSEA matter”.
In protest, he refused to testify on July 29. He said he needed more time to defend himself against charges he accepted bribes for arms contracts when in office.