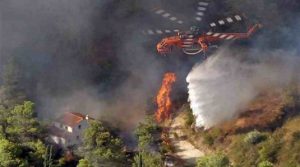 For a second day on July 28, fire services on the islands of Rhodes, Crete and Serifos were battling big fires during the height of the summer tourist season.
In Rhodes, the fire was burning out of control and moving northward with wind changes, heading in the direction of the village of Vati, as well as Apolakkia, while there were also fires at the villages Profilia, Istrio and Laerma, which are under control.
According to the preliminary estimation of the forest inspection, the fire service and the Region of Southern Aegean, more than 30,000 acres of forest land have been incinerated since the outbreak of the fire but crews said they hoped to have it under control by the end of July 28.
The General Secretary for Civil Protection has declared a state of emergency in Municipal Units of South Rhodes and Lindos, following the recommendation of the Regional Governor of Southern Aegean, as the fire threatened inhabited areas.
In Crete, while the fire in the wider area of Pombia in Messara, Municipality of Faistos, was under partial control in the morning, later in the day it flared up again with wind changes. The assistance of two helicopters was required in order to prevent the fire from expanding.
The fire burned greenhouses and crops and threated houses, as it reached their yards. The bells in the village Andiskari rung, in order to evacuate the residents, while the settlement Pigaidakia was also threatened.
The situation in Serifos was said to be better although the fire continued, although images showed how serious it was at one point when it seemed to threaten more destruction. Residents and swimmers in the region of Mega Livadi evacuated by boat because the fire had blocked off the main road in the area.
The settlements Koutalas and Mega Livadi were alsoy evacuated, while according to information the fire burned a house and an old administrative office. The fire on Serifos began on July 25 and proved difficult to contain.