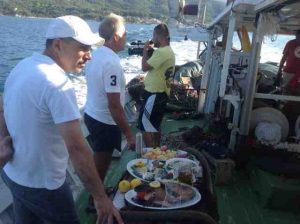 The representatives of the Bulgarian prime time TV show Zvezden’s Kitchen visited Olympiada, located on the northeast point of Chalkidiki, Greece to record shots of the collection of the famous Olympiada mussels and the various ways to cook them.

The Mussels of Olympiada and the Summer Tastes of the Aristotelian Mountain were selected to be featured in an upcoming episode of Zvezden’s Kitchen.

The representatives of the TV show captured in their lens the cooking techniques of traditional pie stuffed with kritama, local fish soup kakavia with fish, mussels and sea food, which was cooked by captains on a fishing boat.

They also recorded the famous loukoumades with Arnea’s honey, as well as the preparation of the local liquors made with fruits and cranberries of the Aristotelian Mountain.

The episode of the TV show in question will be divided in four parts and will be broadcasted in Bulgaria at the beginning of September and at the end of April 2014 in repeat.

The representatives of the Bulgarian TV show were so excited about the initiative’s result that they invited the local chefs in Sofia, so that they will cook anew local dishes at the show’s studio and so that they promote once again the products and tastes of the sea of Olympiada in Bulgaria.

Illegal lead pellets used by hunters in Greece have poisoned and killed dozens of flamingos who migrate to the area each year to breed.
Europe

Thursday's coronavirus summit resulted in a surprisingly swift decision to issue vaccine certificates to ease travel by the Summer of 2021.
Diplomacy