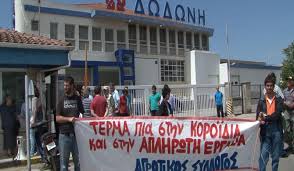 Hundreds of breeders from Epirus, a Region northwestern of Greece, gathered July 26 outside the Dodoni dairy factory, demanding to be paid for the milk they had delivered and for which they said they had bot been compensated.
Reports said they broke the company’s main gate and tried to invade in the company’s building but were stopped by riot police amid clashes, stone-throwing and tear gas.
A little earlier, the company’s Chief Executive Officer informed the breeders that the company’s commitment for April will be paid in August, four months later, and for May in September remaining four months behind scheduled. It wasn’t said if the arrearage would eventually be paid in full or if the company would keep the four months due to the breeders and keep paying them late.