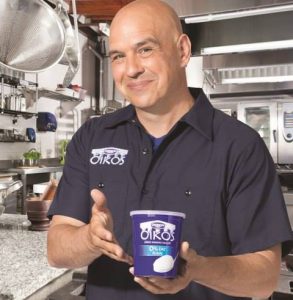 John Stamos isn’t the only Greek who enjoys a little Dannon Oikos yogurt. Greek-Sicilian/American Chef Michael Symon has teamed up with the company to promote their line of Greek yogurt as well.

The Food Network Iron Chef and co-host of ABC’s “The Chew” says he uses the Greek yogurt as a “secret ingredient” to his cooking. The campaign featuring Symon hit airwaves last month, and advertising has already rolled out in-stores.

People can visit Dannon Oikos social media sites for exclusive recipes and tips from Symon, and can learn how to incorporate the yogurt into their own cooking. On August 1, Dannon will launch a promotion on Oikosrecipes.com where consumers can share one of Chef Symon’s recipes for a chance to win a kitchen appliance pack each week of the 10 week promotion, in addition to the $10,000 kitchen makeover Grand Prize.

“Most people are surprised when they find out that I’ve been using Greek yogurt in my dishes for years,” said Symon, author of the upcoming cookbook, 5 in 5. “Growing up, my grandmother made Greek yogurt from scratch and it’s still something I eat every day. Dannon Oikos is just like the yogurt I loved as a child and adds great taste and texture to my culinary creations. I’m really excited for people to try these recipes and experience cooking with Dannon Oikos.”