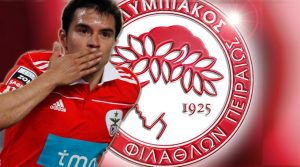 Javier Saviola, a 31-year-old Argentinian soccer player, has joined Olympiacos Piraeus and will sign a two-year contract with the club worth 1.6 million euros ($2.1 million) and received a bonus of 400,000, about $527,000 as well.
Arriving at Athens International Airport on July 24, he was in good mood, greeted the journalists and got into the car that took him to the hotel.
The signing is seen as one of the most important ever for Olympiacos, a perennial champion in the Greek league and a perennial disappointment in European player. Fans say he is the equal of Rivaldo and is a striker known for his speed and his ability to score from almost any attacking position in the field.
Nicknamed El Conejo (The Rabbit), the Buenos Aires-born Saviola made his debut for Club Atlético River Plate at the age of 16, and went on to be a prolific goal scorer for the club. In 2001, aged 19, Saviola moved abroad to play for FC Barcelona in a $22.95 million deal.
On 10 July 2007 Real Madrid signed Saviola after his Barcelona contract expired, on a three-year deal. In 2009, S.L. Benfica and Real Madrid agreed on a €5 million deal that would see Saviola play in Portugal for the next three years, with an option for one more; a €30 million clause was added. He scored his first goal for the club on a penalty in a friendly match against FC Sion and netted twice to send his team into the Guadiana Trophy finals.
In the last hours of the 2012–13 summer transfer window, Saviola agreed on a move to Málaga CF. He played 45 minutes in his first appearance, a 1–0 win at Real Zaragoza on 1 September.
Regarding his international career, Saviola starred in the 2001 edition of the FIFA U-20 World Cup, held in Argentina. He was top scorer and was voted player of the tournament, as the national team won the competition; with 11 goals in seven games, he became the record goal-scorer in World Youth Cups history.
Two years later, Saviola played in the 2004 Olympic Games and won a gold medal. Under coach Marcelo Bielsa, he was given few playing opportunities for the senior team but, after Bielsa’s resignation in 2004, new coach José Pekerman, who also coached the player at youth level, turned the tide in the player’s favor. Saviola was also called up to represent Argentina at the 2006 World Cup.