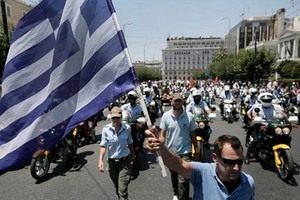 After three years of austerity measures that created a record 27.4 percent unemployment rate and put 1.3 million people out of work – all in the private sector – Greece’s fragile coalition government is turning its attention to reducing its bloated public workforce.
Parliament gave its approval for Prime Minister Antonis Samaras’ government to cut the payroll by as many as 40,000 public workers by the end of 2014.
The plan, part of reforms demanded by the EU-IMF-ECB Troika in return for continuing rescue loans, prompted days of protests and occupations of municipal buildings by workers who will be the most affected, including municipal police officers, school crossing guards, janitors and teachers.
The country’s two largest labor unions, ADEDY, which represents public workers, and GSEE, whose members are in the private sector, held a general strike on July 16th, the day before lawmakers approved the tough measures the Troika said were needed to weed out needless workers.
ADEDY called the government’s plans “the most merciless plan to devastate labor, wage, and pension rights in the last 30 years.” Mayors across the country shut their offices for three days and with services curtailed, rubbish piled up.
The government led by Samaras, the New Democracy Conservative leader, and PASOK Socialists got the backing of 153 members in the 300-member Parliament.
Antonis Klapsis, head of research at the Konstandinos Karamanlis Institute for Democracy in Athens, said the government has silent sympathy from Greeks weary of the patronage system that has protected public workers.
“Many people are sick of the whole situation of having two levels of people – the ones in the public sector who have all the benefits and the ones who have all the difficulty,” he told Southeast European Times.
There was a lot at stake for the government. The Eurozone on July 8th approved the release of 6.8 billion euros in staggered amounts on condition Greece stick to promised reforms.
Newly-appointed Administrative Reform Minister Kyriakos Mitsotakis, son of a former New Democracy prime minister, said Greeks have had enough of public workers being coddled.
“There’s a silent majority out there of people who are hoping a true reform in the administration will actually take place,” he told the Bloomberg news service. “It is those people who have actually stomached the entire adjustment. We have 1.3 million unemployed people from the private sector.” He said he would start with letting go workers in his own ministry by laying off 50 of the 400 staff, mostly drivers.
Haralambos Tsardanidis, who heads the Institute for International Economic Relations in Athens, said the issue of firing public workers was a long time coming. “The government is determined to proceed not only with minimizing the number of public workers but also not having so many public organizations and people who aren’t necessary,” he told SETimes.
The fear among public workers is rampant. “They (the government) need to be aware of the turmoil and the problems they are creating in Greek society,” said Themis Balasopoulos, head of the POE-OTA federation of local government unions. “We’re talking about 6,000 families who will find themselves on the street.”
One of them could be Anna Betsi, 53, a clerk who said she’s worried she’ll be on the redundancy list because she knows no politicians she can call on for favors.  “I can’t say I’m just angry, I’m very frightened,” she told SETimes. “If I do get fired it’s not going to be based on merit. It will be at random and I’ll get the sack after 30 years.”
(Used by permission of Southeast European Times, www.setimes.com)