A Walk in Greece's Favelas 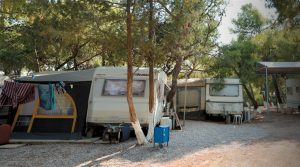 Social phenomena we first met in the Brazilian favelas and in the shanty towns of the central states of the USA have come to Greece.
In the Greece of destitution and misery, the first favelas are born from families who live below the poverty line and find it difficult to cover even their basic needs. People who cannot afford to pay a small rent, the tax on their house, the electricity bill or petrol, abandon their houses and live permanently in mobile homes or tents in organized camping sites in Attica that are open all year long. Most of these people used their campers only for summer vacations around Greece.
In Nea Kifisia, Nea Makri, Kinetta and in many other regions around the whole country, the camping sites which stay open all year long have been transformed into modern favelas and host, at a minimum cost, unemployed citizens as well as low paid householders who struggle to survive. Former business owners, civil servants, former private employees resort to camping sites to avoid living on the streets. In the summer months they have to face the heat, while it is also difficult in the winter as the muddy waters in the entrance of their “home” is an everyday phenomenon. The annual cost for  renting a space does not exceed 1,600 euros. The interior of a camper includes a single or double bed, a WC, a small kitchen with gas and small storage spaces.
Today, more than 300 Greek families live on camping sites and as the owners stress, the number of those who choose to live there is increasing by the month. For example, in the camping site of Nea Kifisia, 14 families live there permanently. The camping has a pool, electricity and water supply throughout the year.